Westland Kaas is the first Dutch cheesemaker to enter the plant-based segment
The two businesses were united by their desire to make the most sustainable - and at the same time the most delicious - cheese. For pioneers Those Vegan Cowboys, this means a vegan, microbial version made from grass that is identical to the original but then without the cow - a development that still needs a couple of years to bring to fruition. Westland CEO Henny Westland has already publicly stated his ambition that by a time just 15 years from now (2036), Westland will only be producing climate-neutral cheese. This joint venture makes Westland the first major traditional Dutch cheesemaker to launch a plant-based variant into stores.

Anno 2021, Annie the modern cheese girl promotes ‘Fromance’
It’s no surprise that WildWestLand’s mascot is Annie, a modern cheese girl who wants to make her family pride and joy futureproof. And the new cheese must also taste fantastic - she won’t accept cheesy excuses! Which is why she corralled a cowboy who had wild ideas about a steel cow and the rest is history! This modern cheese girl calls her delicacies ‘Fromance’, which name (= Fromage + Romance) celebrates the plant-based ambitions they both share. In line with the goals set out by Henny Westland and Jaap Korteweg (co-founder of Those Vegan Cowboys), it’s a brand(-new) narrative where not one word is cooked up. And our ambitious cheese girl is already active on social media as @wildwestland_annie.

Entire revenue used for the development of plant-based Fromance
The founders of WildWestLand say that they lassoed their new idea ‘for the love of cheese’. By combining their expertise, these [canny] entrepreneurs have already been able to partially realise their ambitions by making some tasty Fromance together. All the same, today’s Fromance is not their ultimate goal - it’s just a way of bringing the ultimate sustainable delicacy to market more quickly. This is why all the revenues from their WildWestLand joint (ad)venture will be ploughed back into hard plant-based cheese varieties in particular.

Henny Westland (Westland CEO):
‘It is our dream to make the very tastiest plant-based Fromance we can. Our love for cheese and cheesemaking has brought us together in this special partnership that allows us to utilise the 85 years of experience amassed by our family business, which we pour into this new product that is good for both animals and the environment and that every cheese lover will be pleasantly surprised by.’

Jaap Korteweg:
‘I hope that our collaboration with Westland Kaas will help them to achieve their goal of being climate-neutral by 2036 and that they will couple this by being 100% plant-based and enjoying 1000% turnover growth. That would be really great not only for the cows and their calves but also for people and our planet.’

This June at Albert Heijn stores
From mid-June, the general public can grab their first taste of the first three Fromances: a traditional neutral variant named Cream Passionel, the ‘match made in herb heaven’ that is Garlic & Herb Affair and the mild and spreadable Unguilty Pleasure Dip. More Fromances are in development and may even be launched by the end of this year. WildWestLand is in talks with multiple sales channels and will be available at Albert Heijn stores from week 24. Around that time, the curious will get the chance to be the first people to try these products at a ‘plant-based lover’s lunch’. 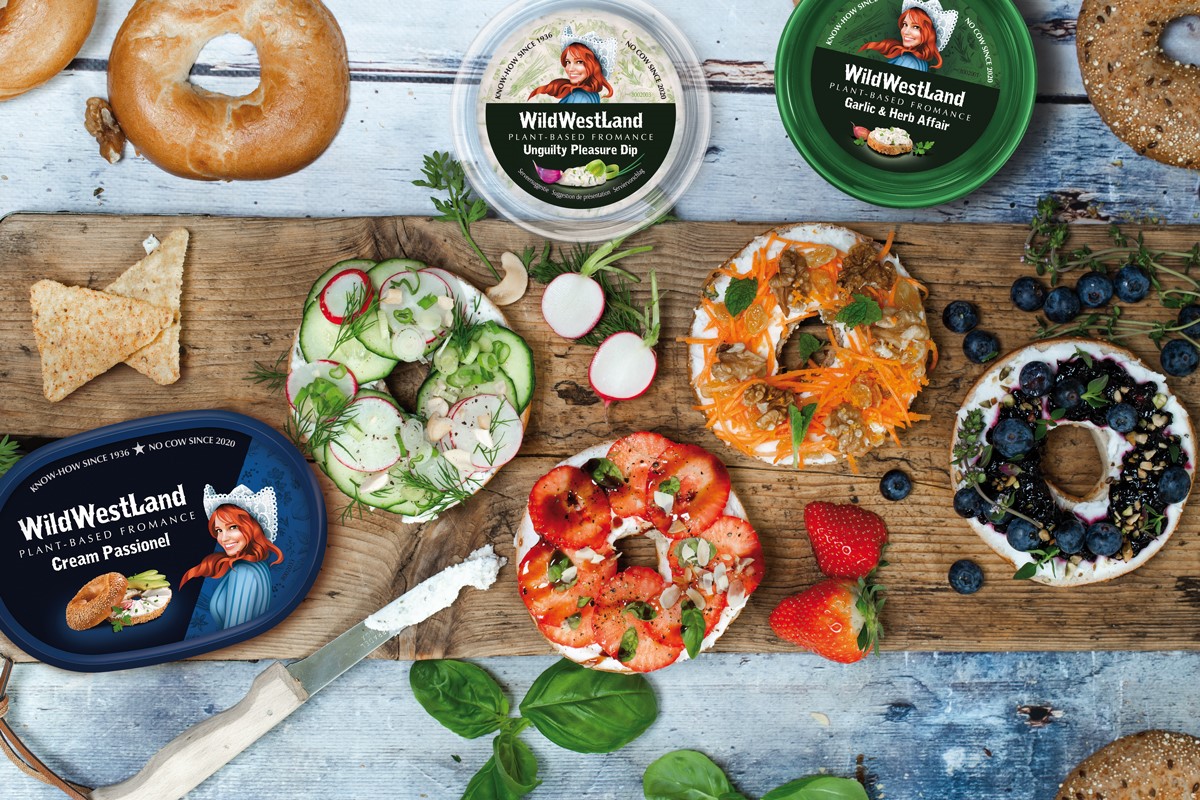